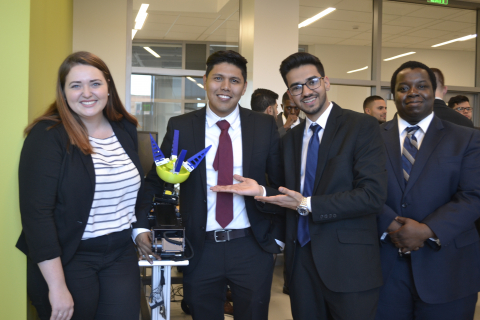 Industrial and systems engineering seniors bring all that they’ve learned as undergraduates to the table in a culminating capstone project.

The Design of Engineering Systems course begins in the spring semester of junior year where student teams research and select a challenging design problem to pursue. The final projects incorporate building prototypes and developing the technology systems to support the project. Students also present their research to a panel of judges that include industry representatives and faculty.

This year’s design projects, presented in December, included original innovations conceptualized by students as well as those related to faculty research. The scope and impact of the 15 projects presented reflect the versatility of an industrial and systems engineering degree, says professor and department chair Mohsen Jafari.

“In today’s fast moving business environment, industrial engineers are increasingly in demand for their valuable system-of-systems thinking approach, quantitative decision making, and depth of knowledge in data analytics, optimization, and automation and control. Our department and field of engineering encompass the areas of quality and reliability, advanced manufacturing, and smart systems—components that are reflected in the projects presented today.”

The range of projects for the 2018 cohort of students encompassed engineering innovation in the areas of agriculture, traffic congestion, retail shopping, robotics, warehouse distribution, and security breaches, among others.

Prof. Jafari gave the students free reign on their project selection, challenging them on uniqueness, creativity, talent, and nerve.

“I left a lot of the project selection to the students,” said Jafari. “That’s where the nerve part came in.”

They had to fully believe in their innovation and move forward with determination that their concept was viable, he said. The resulting projects include a lot of fresh ideas. 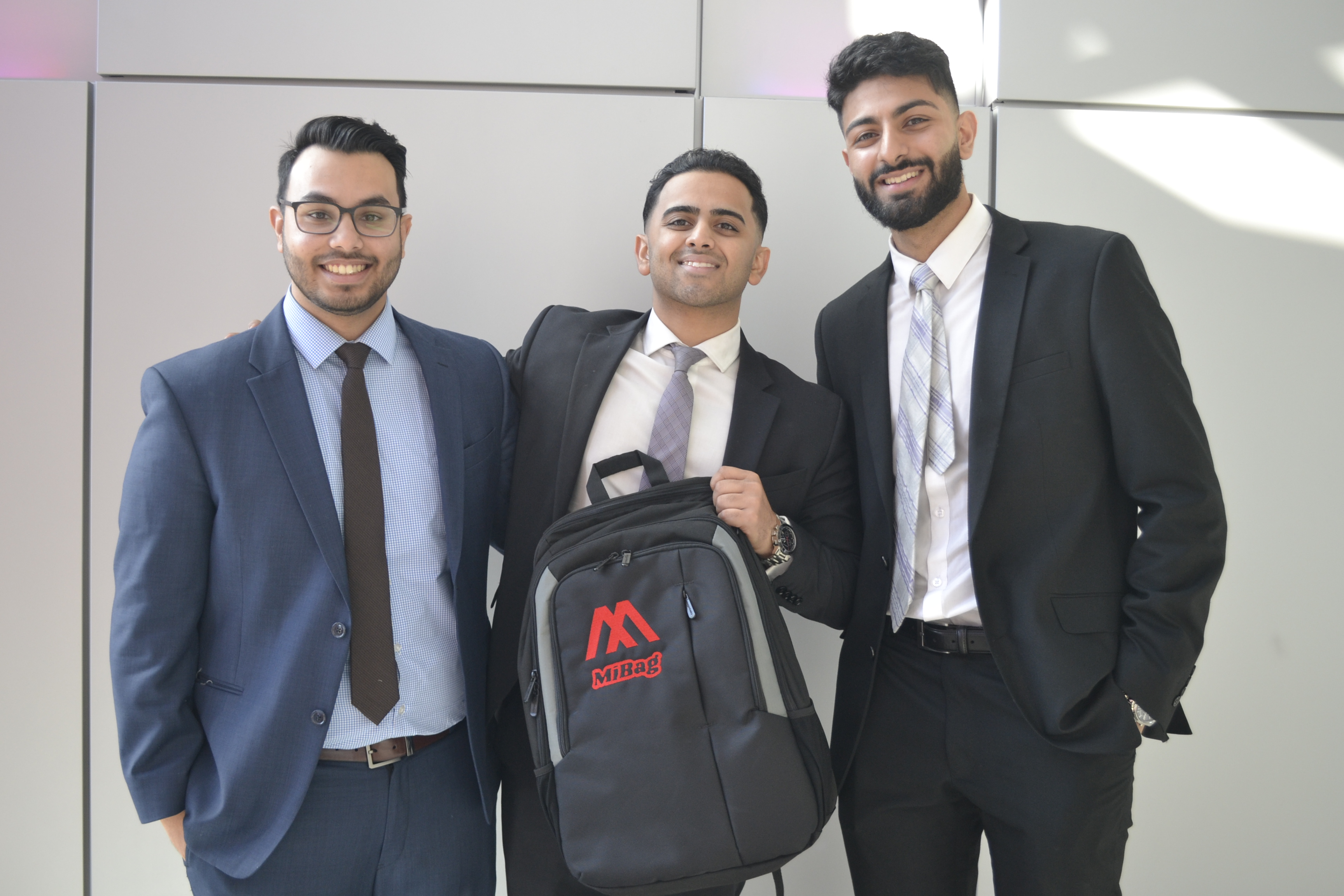 For example, the MïBag team (pictured at left) tackled a problem that was the result of a real life scholastic catastrophe when team member Suraj Rathod (center) found himself without his calculator before an Elements of Electrical Engineering exam. He was sure it was in his backpack before leaving home after an all-nighter studying, but it was not.

The team, which also included Ronit Hemrajani (right) and Sam Seal (left), created an integrated smart scheduled bag that keeps track of items in a backpack through a Bluetooth beacon module, Arduino microcontroller, and radio-frequency identification (RFID) reader and tags. Items in a back pack are tracked and monitored via a cell phone, with settings controlled by the user.

The exam nightmare had a happy ending for Rathod when another student finished the test early and lent him his calculator, but that feeling stayed with him. The team believes MïBag could easily become a reality.

“Our project stemmed from a complex problem, but had a pretty simple solution,” said Seal. “We used technology that has been around and applied it in a new way. That’s how we differentiated ourselves.” 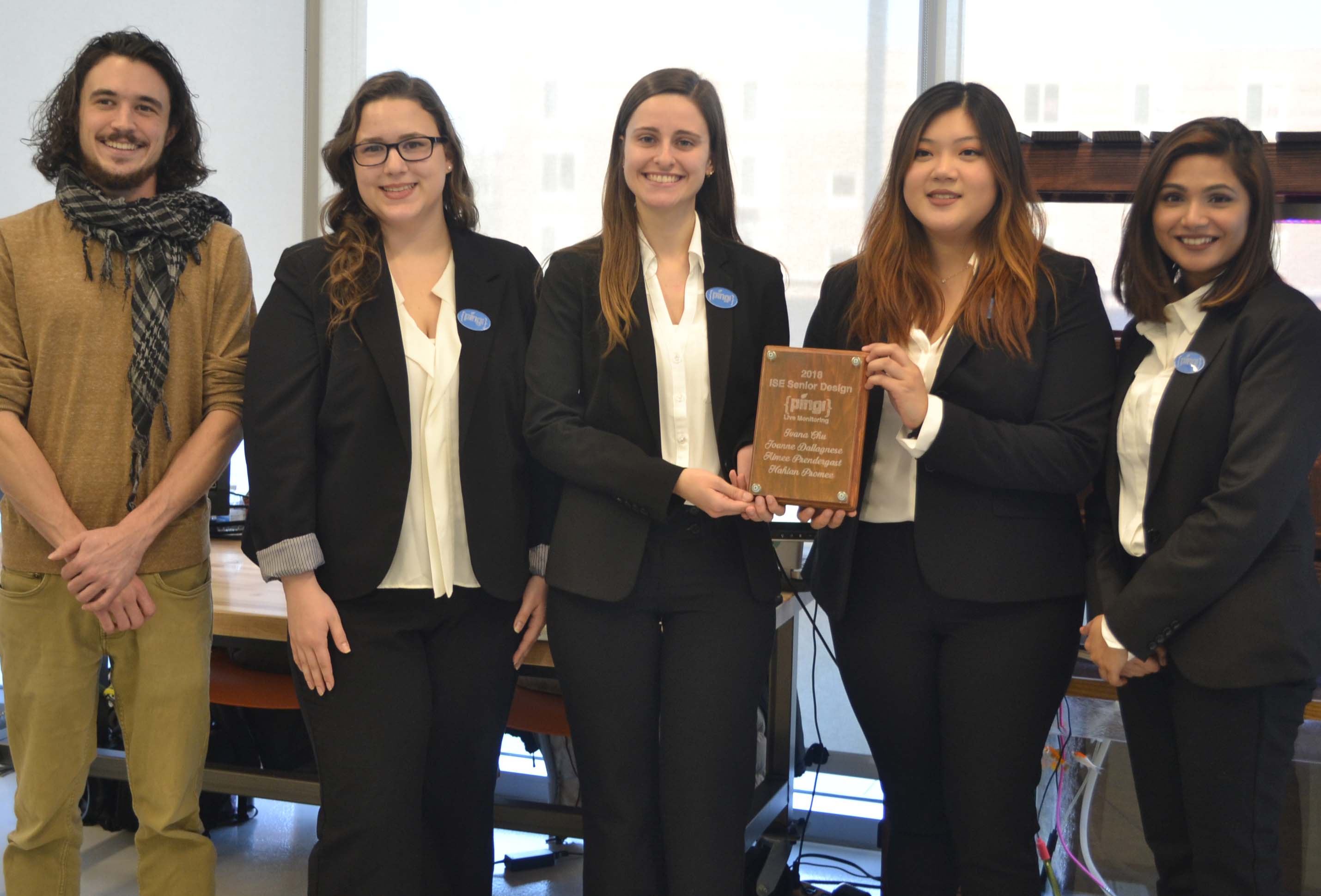 The Ping! aquaponic system brings innovation to the field of sustainable farming. Conceived by Aimee Prendergast (second from left) after spending a summer working at Drop the Beet Farms in Freehold with farmer Cody Parker (left), the system-within-a-system project is data processing and monitoring system that tracks and stores vital information related to aquaponic bays, sending data to a live monitoring website.

Parker says the system could not only save time, but also money in the event of a fluctuation in temperature, oxygen, or PH levels of the water tanks that house the 50 koi that provide the fertilizer and water purification that run his farming operation.

“Aimee recognized the issues I was facing and took the ball and ran with it,” said Parker, who wishes this system was actually available for installation at this farm.